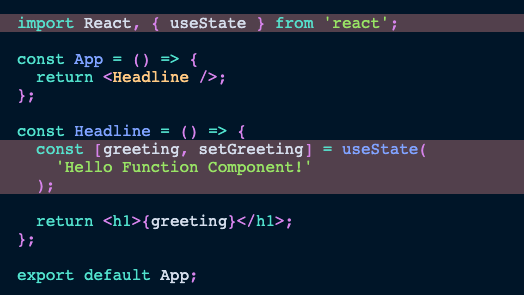 The useState hook takes an initial state as parameter and returns an array which holds the current state as first item and a function to change the state as second item. We are using JavaScript array destructuring to access both items with a shorthand expression. In addition, the destructuring let's us name the variables ourselves.
Let's add an input field to change the state with the setGreeting() function:

Note: The input field receives the value of the component state too, because you want to control the state (value) of the input field and don't let the native HTML element's internal state take over. Doing it this way, the component has become a controlled component.